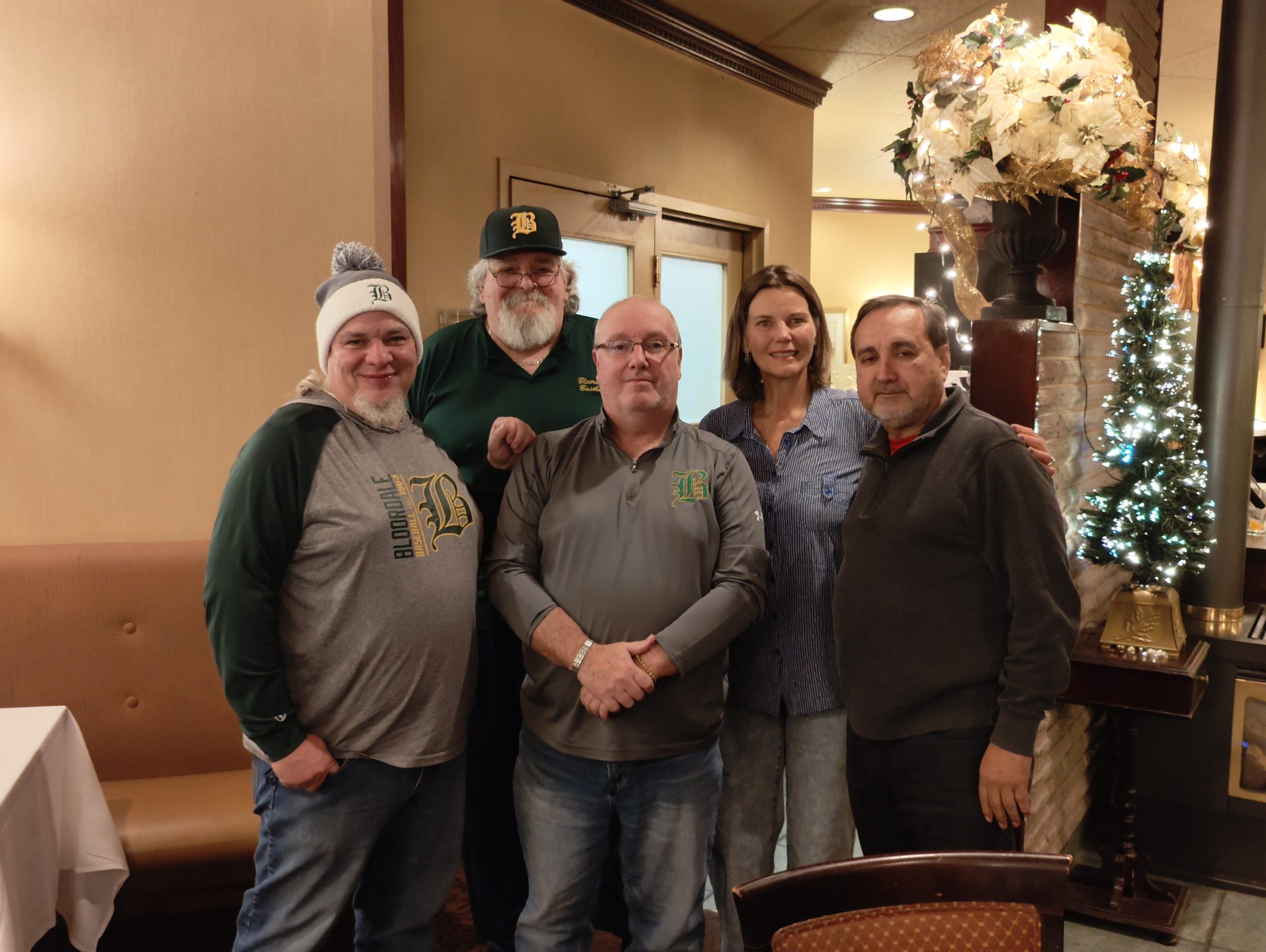 November is AGM time, which gives us an opportunity to recognize some of our great volunteers.

Below is a picture of the five dedicated Bloordale volunteers who were recognized at the Bloordale Annual General Meeting, which took place at the Canadiana restaurant on Tuesday, November 22, 2022. 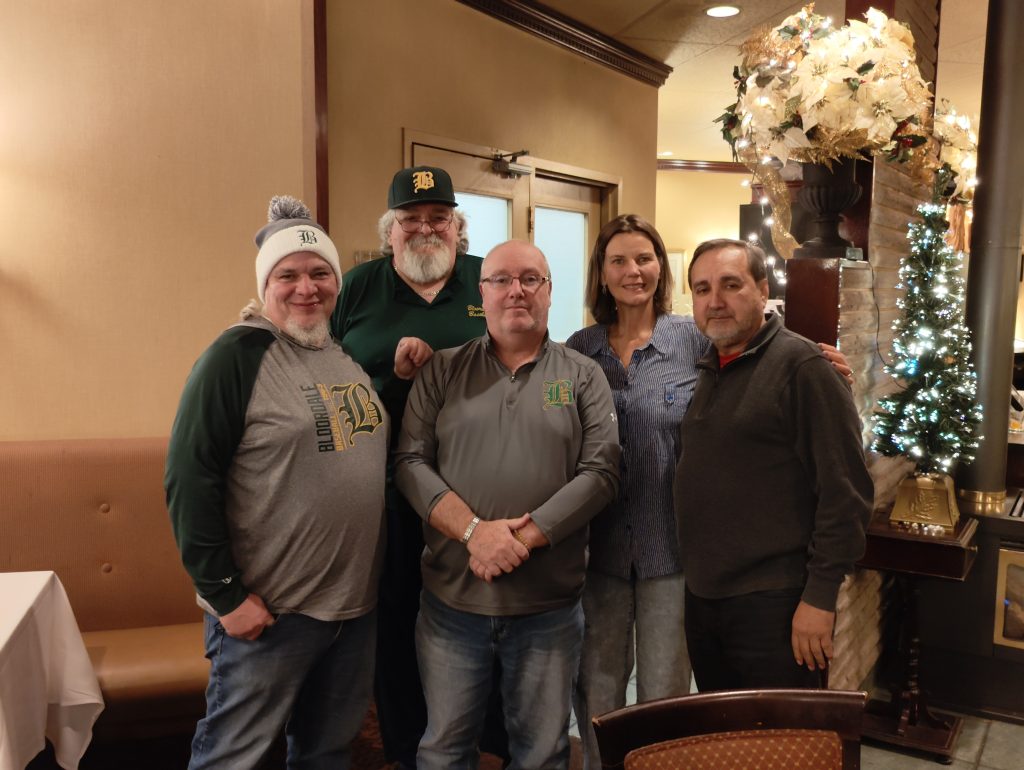 More information about the accomplishments of these dedicated volunteers can be found here. 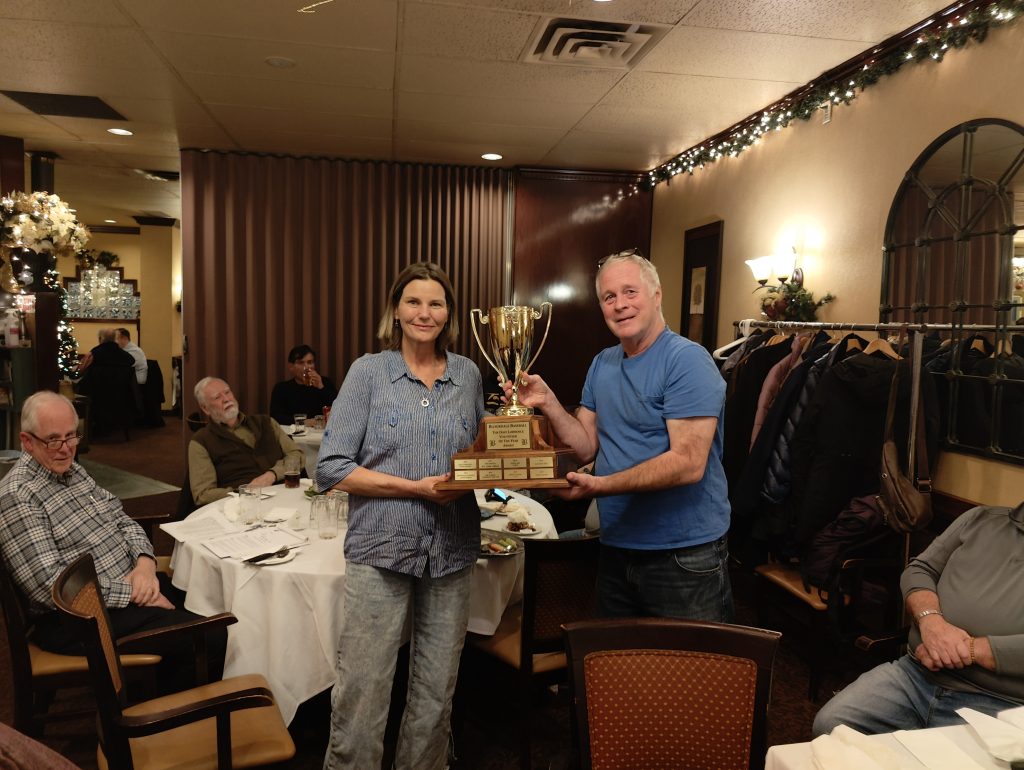 This recognition is way, way overdue.

When I asked Cecilia what input she would like to add to the AGM report, she said that whatever needs to be done, she will do.  And so it is with Cecilia.

With Modine, her constant companion, Cecilia is a well-known figure at Bloordale diamonds, doing whatever needs to be done – hanging banners, checking equipment boxes during the off-season, mentoring umpires, maintaining fields after a rainfall, and so much more.  It’s impossible to list all of Cecilia’s contributions. She currently handles the double duty of vice president and house league umpire-in-chief and has held many other executive positions during her 20-plus years with Bloordale.  Cecilia is involved in our women’s slo-pitch league and has even organized tonight’s event.  Cecilia is responsible for recruiting me into the Bloordale executive, though that shouldn’t be held against her.

Like many volunteers, Cecilia became involved with Bloordale via her children.  Luckily for all of us, Cecilia has stayed on long after her children graduated from Bloordale.

I value Cecilia’s friendship, and I appreciate all her advice.

Cecilia has earned the respect and admiration of all the people she has met over the years. I sincerely thank Cecilia for her many years of community service. 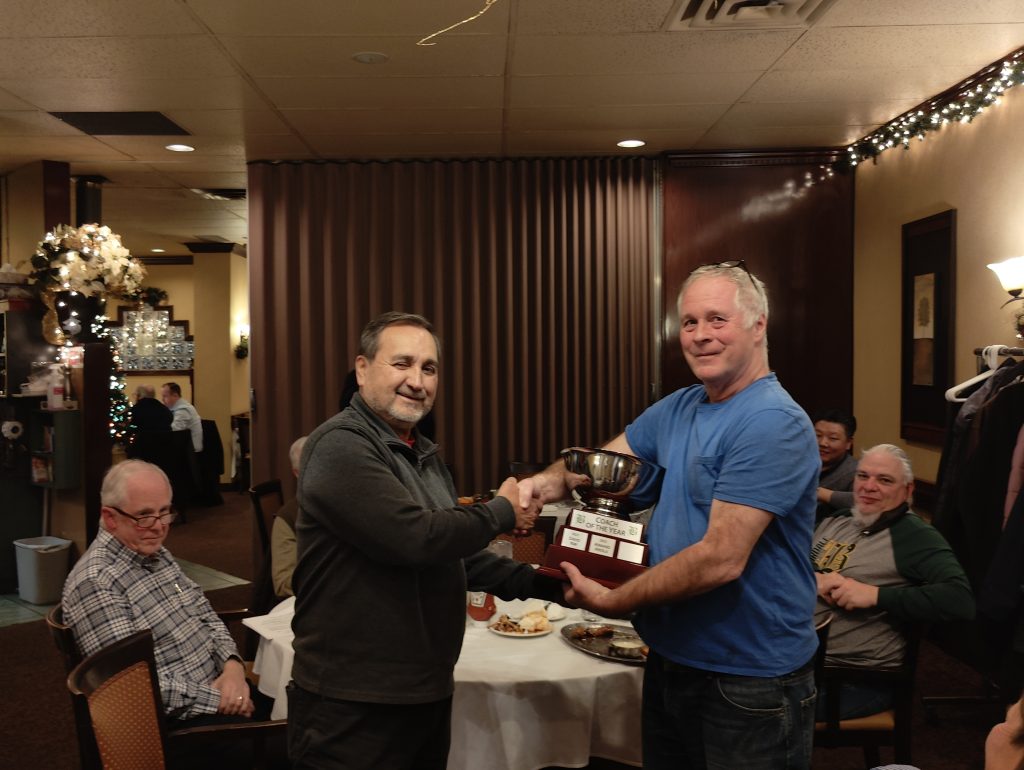 Armand is a very strong member of the community and has been a Bloordale coach for many years.  Here is some feedback from some other Bloordale members:

He is a great community guy and works well with the kids, always supportive and up-beat and positive. He always has the kids best interests at heart and puts them first.

Besides coaching, Armand is a great long time supporter of the league as a sponsor and has never turned us down since the first year HE CAME FORWARD to offer financial support.
– Patrick

I want to say that Armand Ardila was an outstanding coach. He was always positive while getting the kids to push themselves and play better than they sometimes thought they could. He always had a game ball to give to the player of the game nominated by the players, held extra practices and pizza parties, and made sure the kids had fun.
– Walton

Armand is an amazing coach and a great person and always willing to be there to help.
– Susanne 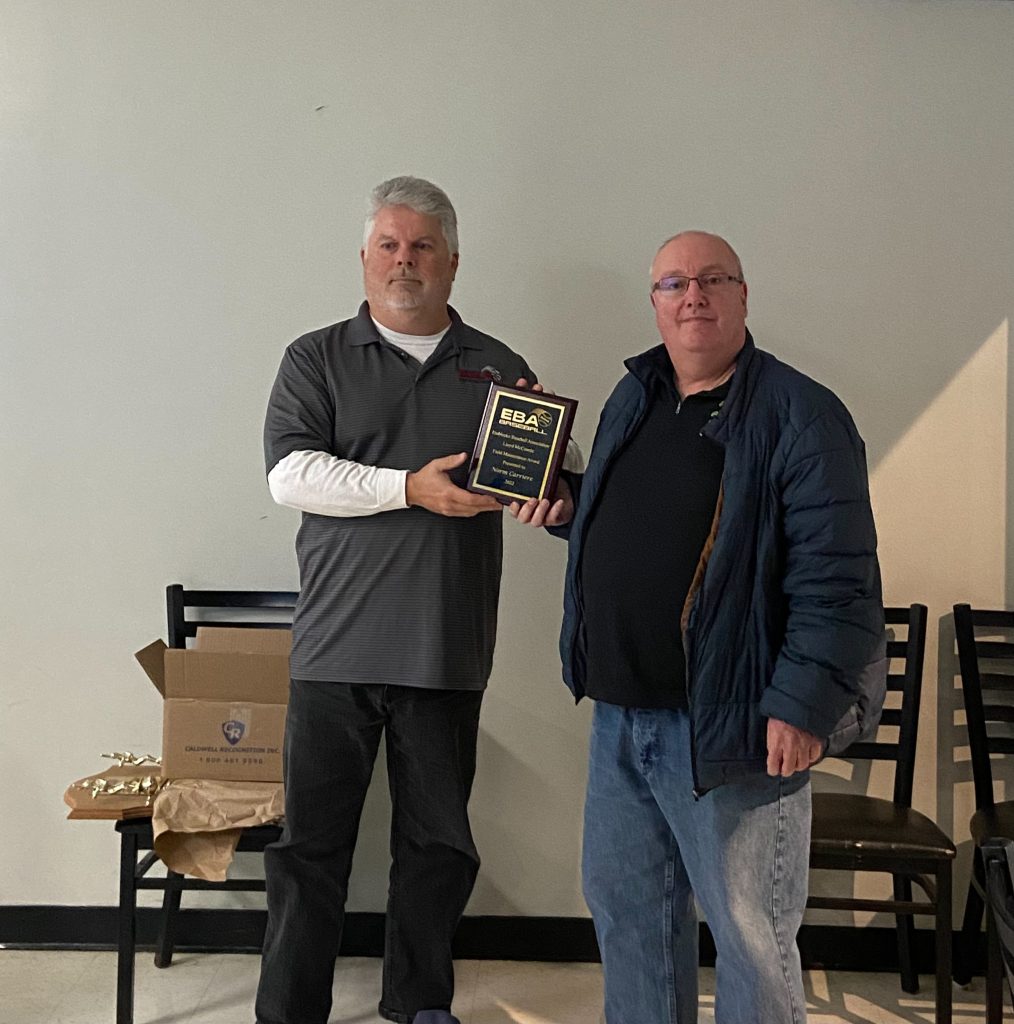 The criteria for this award states:

Norm could have won this award in any given year.  As past winner, Patrick McConnell wrote:

The reason Norm Carriere should receive this award is because of his dedication on a daily basis and desire to not just maintain Bloordale’s fields to thstatus quo, but to go the extra step for the many tournaments, playoffs and other important games held there. Throughout the summer there were many times when he would check and work on the field multiple times in a single day to freshen up the fields when more than one game was played on it. Whether the day was extremely hot and dry, or a rainstorm would pass through it is almost certain that Norman would do what was possible to get the field in playing-shape. Through the many obstacles throughout the season, Norman continues to overcome them such as winterkill, drought stress, weed invasion, degradation of the field’s drainage grading and many more. He also makes great attempts to connect with municipal workers at the field to work in tandem during the cultural practices they undertake throughout the year. An example of this is when Norman would water the field after a core-aeration to help water enter the rootzone to promote healthier turf in the outfield. 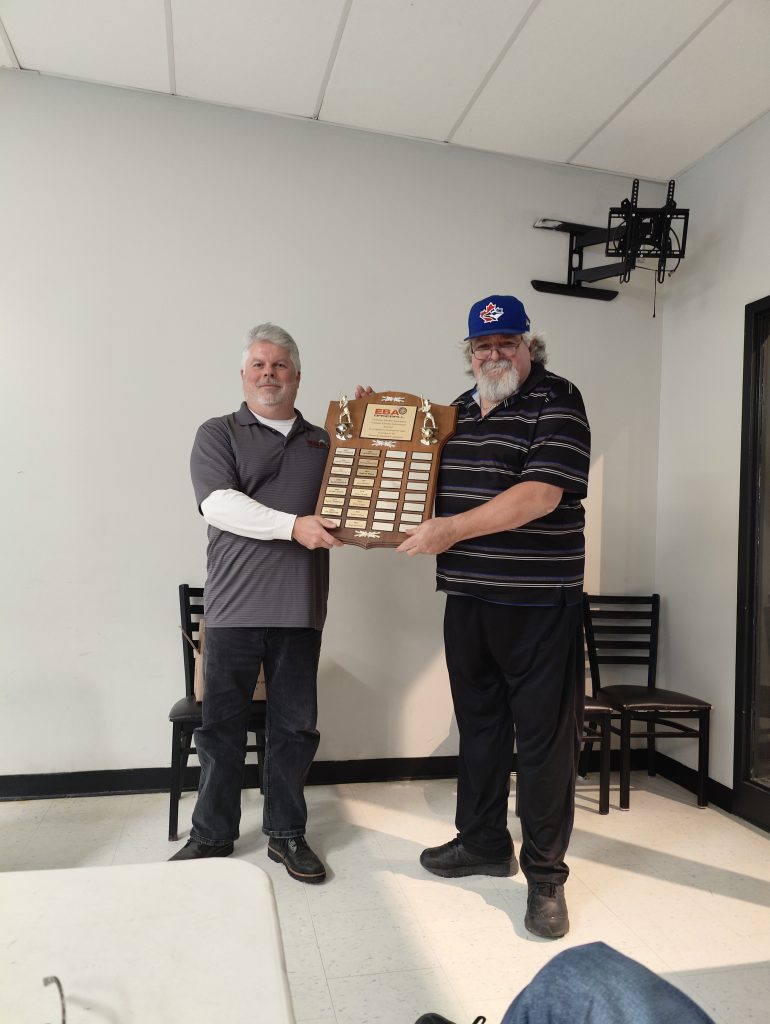 Current Bloordale equipment manager Paul MacLeod has served the Etobicoke baseball community for over twenty years, including long tenures with both Martingrove and Bloordale, as well as currently serving as the EBA umpire in chief and webmaster.

Paul has also been a successful coach at many different divisions and levels.

Very few people know how to maintain a baseball diamond as well as Paul.

Over the years, Paul has filled many roles and undertaken many duties and responsibilities – almost too many to mention.  But here is a shot at mentioning some of them

The current director of select for Bloordale, Patrick has a long resume for both Bloordale and the Etobicoke Baseball Association, including president roles in both organizations.  Patrick is also very active with Baseball Ontario (also sometimes referred to as the Ontario Baseball Association).

At the recent OBA AGM, Patrick received his 10-year OBA service recognition for his years of service years on SOBA , SELECT COUNCIL, and the Board of Management.

Patrick is one of the most dedicated volunteers, of any sport,  in Etobicoke!